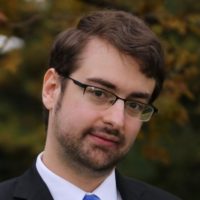 Christopher Gideon is an amateur author and filmmaker based out of the United States. While attending the University of Wisconsin – Stevens Point, Christopher was both an author and head editor for an annual student-published anthology known as Barney Street, having several short stories and poems featured in the publications. After graduating from college in 2015, Christopher set aside writing to become a professional hospitality agent, though he maintains a passion for horror and the unsettling.

The Man on Easter Island