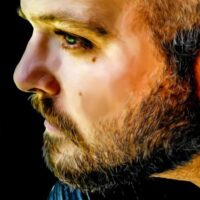 Ryan Harville was born and raised on Alabama’s Gulf Coast, and still resides there with his wife, four kids, three cats, and a golden retriever named after Thomas the Tank Engine. He studied creative writing at the University of South Alabama, and spent six years in the U.S. Army. Ryan writes predominantly horror tales, but occasionally branches out into sci-fi, fantasy, and some combinations of the three.

Harville is also a member of the Horror Writers Association.

A Form of Malice