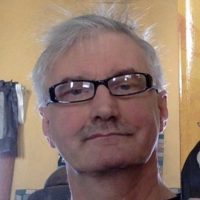 Stanley B. Webb came to be in the year 1961. He grew up in central New York State, near the shoreline of Lake Ontario. He has worked as a restaurant dishwasher, a video rental clerk, a diner cook, and in an automobile factory. He currently lives on a small homestead with his family.

Although he has been writing since childhood, Webb began his fiction career later in life, after taking early retirement from his factory job.

Stanley thanks everyone who has read his work.

Featured stories from Stanley B. Webb: