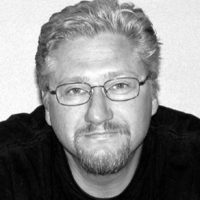 Kevin David Anderson was born in Indiana, and currently lives and writes speculative fiction in Southern California. Before becoming a writer and active member of the HWA, Anderson earned a B. A. in Mass Communication (TCOM) with a focus on Media Production from CSUF (Fresno State), and worked as a marketing professional for more than a decade, during which he managed award-winning campaigns for both television and radio.

Anderson’s debut novel the geeky, cult zombie classic, Night of the Living Trekkies, from Quirk Books, the publisher of Pride and Prejudice and Zombies, is a funny, offbeat Zombie novel that explores the pop culture carnage that ensues when the undead crash a Star Trek convention. Publishers Weekly gave Night of the Living Trekkies a starred review and the Washington Post listed it as one of the top five Zombie novels of 2010.

Night of the Living Trekkies and Anderson’s follow up, Night of the ZomBEEs have become required reading in college courses, most notably the class designed for incoming freshman, How to Survive Your Freshman Year by Studying the Zombie Apocalypse, at Mansfield University in Pennsylvania.

Anderson’s short stories have appeared in almost a hundred publications, from anthologies and magazines to podcasts and radio dramas. His work has appeared in multiple languages and on every continent, excluding Antarctica – mostly because penguins and polar bears don’t read. Anderson was the first American to be published in the award-winning South African Horror Magazine, Something Wicked. Anderson’s short story Third Shift took first position in the Top International Horror competition from Rain Fall books in the UK. Anderson has contributed to many award-worthy publications including the British Fantasy Award-winning magazine Murky Depths, and the Bram Stoker nominated anthology, The Beauty of Death from Independent Legions Publishing. Several dozen of his stories have been turned into audio productions with voice talents like Jason Hill, Rish Outfield, and Mur Lafferty, on Parsec Award-winning podcasts like Pseudopod, The Drabblecast, The Dunesteef and on the very popular Simply Scary Podcast and the NoSleep Podcast.

With a lifelong passion for monsters, the walking dead, and all things that go bump in the night, Anderson was a guest at the first-ever Zombie Culture convention, ZomBcon held in Seattle 2010, with other zombie / horror genre icons like George A. Romero, Bruce Campbell, and Max Brooks.

When not writing horror, comedy, or horror-comedy, Anderson likes spending time at the beach with his family, attend horror conventions and book festivals, work part-time with special needs students, and write and tell bad, corny, nerdy jokes. Dad jokes with a geeky twist are his specialty and with the help of his son, he published The Geektastic Joke Book for Kids under the pseudonym, Giggles A. Lott and Nee Slapper. Giggles & Slapper’s next book Jurassic Jokes, A Book 65 Million Years in the Making will be available later in 2019.