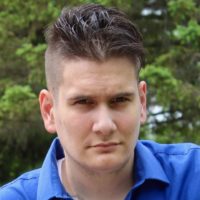 Nick Botic is an author and publisher from Milwaukee, WI. Following a stay in a rehabilitation facility in order to rid himself of a years-long heroin addiction, Nick began writing after discovering the Reddit community r/NoSleep. His first series, an 8-part saga about a hotel worker, received rave reviews, and prompted him to continue writing.

Since then, he has written over 100 short stories and series, including the viral, award-winning hit “Daughter’s Drawings.” His stories consistently find their way to the top 5 spots on the 13 million-plus member Reddit community, often receiving awards. His work has been published in over 10 collections, including his own anthologies “The Things We Fear” and “An Ode To Terror,” and his novella “A Halloween In Glarus.”

In 2019, Nick has secured adaptation deals, with several of his stories in various stages of production. His next release, the 25-author anthology “Sirens at Midnight” is due July 1st, and has already been met with positive reception.

Nick plans to continue balancing the responsibilities as publisher while also writing new material to keep his fans happy and horrified.