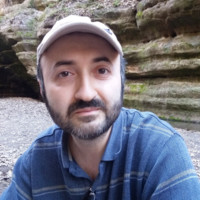 Simon Simonian was born in Armenia and moved to the US as a student at the age of 20. As a teenager, he learned English as his third language and quickly grew enamored with British and American literature. However, his first attempts at writing were in poetry. Later he tried his hand with short stories ranging in style from innuendo to science fiction to horror. Among his major influences are Borges, Bradbury, Kobo Abe, Bulgakov.

Today Simon lives in Chicago, IL. By day, he’s an entrepreneur and a C-level executive specializing in systems and IT. On the pitch, he’s a happy husband, a loving father of two and a writer at heart. Among his other interests are progressive rock music, horror movies, futbol (okay, okay… “soccer”) and travel.