Posted at 11:00h in Strange and Unexplained by CreepypastaStories.com 0 Comments
📅 Published on June 10, 2022

Today’s my birthday.  That’s not generally something I bring up.  I don’t celebrate it.  Almost no one knows when it is, and I like it that way.

I don’t like being put on the spot.  I don’t like the falseness of people wishing me a happy birthday because Facebook told them to.  The whole thing just feels like an obligation.  So the fewer people who know about my birthday, the better.

All that said, I went out for a birthday dinner treat last night.  One of these years, I’ll forget about my birthday entirely, and that’ll be perfect—but in the meantime, it feels weird to just let it go by like any other day.  I didn’t invite anyone else along.  I didn’t make a thing out of it.  I just went out for sushi at a place I like that’s a bit more expensive than my average.

It was pretty dead in there, which was perfect.  I had an entire section of the restaurant to myself.  It was just me and a frankly unreasonable quantity of sushi rolls, but I’d ordered while hungry and I was prepared to face my mistakes.

About three-quarters of the way through my food, I was starting to slow down significantly.  I was still determined to finish it all, but my hunger had long since been sated and my attention was definitely wandering.  That’s when I noticed the music that was playing over the restaurant’s speakers.

Restaurants always have some kind of music going.  It’s usually just something inoffensive to serve as background noise, to make it less awkward when conversations stop because everyone’s got their mouth full.  It’s like the music in elevators.  It’s designed to be bland, something that no one cares about.

Usually, anyway.  This song, though, first caught my attention because I thought it might be the tunnel song from Willy Wonka and the Chocolate Factory.  You know, where the boat’s sailing through that psychedelic darkness while Wonka’s chanting that weird dirge about how “the rowers keep on rowing?”  Super creepy scene.

Anyway, this was sort of like that, though I can’t say exactly how.  It was discordant, but not unpleasantly so.  It was being played on some sort of stringed instrument, but not one I could name.  It nipped at the edges of my consciousness, demanding attention.  When I finally started actively listening to the song, the words were even stranger than the tune:

every day a gift of time
growing older, aged like wine
a taste for flavor will be fine
we celebrate your birthday

At first, I just thought it was an odd coincidence.  It’s not like anyone knew I was out for my birthday, and no one in the restaurant was saying anything or paying any attention to me.  So I just wrote it off and kept eating my sushi.

The song didn’t end, though.  It must have looped somewhere because it just kept playing.  I couldn’t make out all of the words, but of those I could, every verse was weirder than the last.

And on and on like that.  It must have gone on for ten minutes or more before the waiter happened by and startled me out of my fascination.

“Can I get you anything else?”

I blinked, trying to refocus on the restaurant around me.  “No.  No, I’m fine.  Hey, is it someone’s birthday?”

He looked around at the mostly-empty restaurant.  Only two tables were filled aside from mine.  There was an older couple over against the far wall and a quartet of teens in the back corner.  Neither of these groups looked particularly party-like.

I gestured at the ceiling.  “The music.”

He tilted his head, listening.  After a moment, he shrugged.  “Yeah, the chef’s got it set to some J-pop station.  They play all kinds of weird stuff on there.”

“Yeah, but—have you listened to the lyrics?”

He shrugged again.  “The translations aren’t always the best, either.”

“Okay, but why is it looping?”

He grinned uncertainly at me as if I were playing a joke on him.  “I don’t think it is.  I mean, I guess maybe the station could be doing that?  I just don’t think they would.”

“But—” I realized that short of making him stand there for another ten minutes to prove that the song wasn’t changing, there wasn’t any way to convince him.  Also, why did I even care?  It was just an odd song.  I could solve this by leaving the restaurant.

“Absolutely.” He bustled away, no doubt glad to be done with our strange conversation.

The song warbled on as I signed the check and gathered up my belongings:

I shouldered my bag and hurried out of the restaurant, the song vanishing as the door closed behind me.  Once free from its clutches, I shuddered.  Remembering it felt worse than listening to it the first time.  The words seemed to slide around in my mind, forming unsettling patterns.

My mind worried at the song like a tongue probing at a loose tooth, rattling it back and forth.  I tried to think about something else, anything else, but the song just kept creeping back in.  I think I was starting to puzzle out some of the verses I hadn’t heard the first time.  Certainly the words didn’t seem familiar.

The tune jangled in my mind.  My mouth ached.  I realized I was clenching my jaw, and forced myself to relax.  The words kept unraveling themselves inside my head, though, spilling out into some sort of bridge.  The stress crept back as the lines intensified.

happy day of elevation
looking upward to salvation
reaching far above your station
can’t you see the consternation?

dark, foreboding constellation
spells out your determination
but despite your fascination
all will end in ruination

The song was at a fever pitch, shouting in my head.  I lurched against a wall and leaned there, letting it hold me up as I frantically dug through my bag.  I found my headphones and slammed them into my ears.  I pressed play on my phone, not even caring what song I heard.

Through my earpieces came the tinkling string notes of that terrifying birthday song.

I tore my headphones out and stared at them in horror.  My phone claimed it was playing one of the songs from my library, but when I raised the headphone to my ear again, I could hear the birthday song buzzing inside like a struggling insect.

I disconnected the Bluetooth, thinking that maybe something had hijacked my headphones, but I almost dropped the phone when the song started spilling out of its speaker.  Frantically, I mashed the stop button.

For a moment, things were beautifully quiet, nothing around me but the sounds of the city, of people going about their lives.  Then, like a relentless itch, the song started up in my head again.

I shoved my fingers into my ears, as if that would help.  I hummed, sang, anything to drown out that taunting song.  No matter how much noise I made, though, it was always there, lurking, waiting for a moment of silence to reassert itself.

My apartment had never been so far away.  I ran up the stairs when I reached my building, bleating to myself.  I burst in the front door, raced down the halls, fumbled my keys into the locks and slammed the door behind me.  Grunting, shouting, I ran for the bathroom, for the medicine cabinet.

There, top shelf: the zaleplon I’d been prescribed last year when I was fighting with insomnia.  It always knocked me out within minutes.  I ripped open the cap and scrabbled for the pills inside.

I threw three into my mouth, then added a fourth one just to be sure.  I cupped my hands and gulped directly from the faucet, letting the water wash the pills down into my stomach.  For a moment, the rush of the water seemed to drown out the song, and I almost relaxed—until I started to hear plucked strings within the white noise, and I hastily turned the faucet off.

I huddled in bed after that, waiting for the pills to kick in.  The song gnawed at my mind, daring me to listen.  I fought it with snorts and gasps and swallowing noises.  Anything with a pattern, anything with a melody, it could find its way in.  I must have sounded like a dying animal, but it kept the song at bay.

I awoke sometime in the middle of the night.  My mouth was dry, my body ached, my bladder throbbed.  I was still in my street clothes.  Half-awake, I stumbled to the bathroom to relieve myself.

As I flushed the toilet, I heard the song again.  I plugged my ears, expecting the gesture to be futile, and the song stopped.

Cautiously, I lowered my hands.  There it was, soft string notes just above the threshold of audibility, insidious lyrics sneaking their way along.  I crouched down, and the volume raised ever so slightly.  The song was coming from the sewer.

I left the bathroom and shut the door tightly behind me.  Still I could hear the notes, seeming to drift in from everywhere.  My kitchen sink echoed with the distant song.  The notes dripped gently from the air vents.  From outside, unseen singers carried the tune.

I looked outside.  From the shadows of trees, bushes and parked cars, shapes shuffled forth.  Each one held a candle which only defined the darkness of the creatures holding them.  They slowly drew closer, encircling the building, softly singing.  When they reached the walls, they began to climb.  The candle flames burned before them, drifting upwards as the shadows rose.

I’ve tried calling for help.  Any number I dial just plays that song at me.  If there’s anyone on the other end, I can’t hear them.

The singers are pressed up against my windows.  I can hear them in the hallway, rustling against the door.  There’s a slow and steady pressure.  I just saw the first pane of glass crack.

I think it’s time to just let them in.  After all, it is my birthday.

The Depths of Trust

The House in the Rearview Mirror 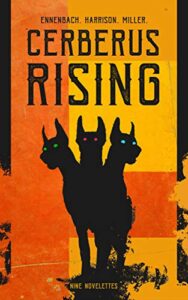