17 Sep I Moved into a Haunted House

Posted at 11:00h in Strange and Unexplained by CreepypastaStories.com 0 Comments
📅 Published on September 17, 2020

“I Moved into a Haunted House”

So, I came into some money. You see, my aunt Martha passed way after a long battle with cancer. I was her favorite nephew, so she left me a little extra in her will. At that time, I was living with my girlfriend Tara, in a run-down, one-bedroom apartment in the seediest part of the city. So we decided to look at actually buying a house. We looked at several houses before we saw one that we both liked. It was a large, two-story late-Victorian era house with cream-colored siding, green shutters, a wraparound front porch, a turret, and a second-floor balcony. It was located on the west side of the city, which was close to both our jobs, and the price was right. So we talked to the realtor and soon the house was ours, and Tara and I began moving in.

As we were moving our stuff, a man came by walking his dog. He looked at us and the U-Haul van, then up at the house. “Are you two moving into that house?” he asked. I was like, “Yeah, we are.” The man looked back at the house, and said, “Good luck, you’re going to need it.”

I then looked at the man and was like, “What do you mean by that?”

The man just shook his head and said, “That’s ‘ol Mugsy Morgan’s House you’re moving into.  Ain’t nobody been able to stay in that house for more than a few months, I thought every real estate agency in the city had given up trying to sell this property.”

I then asked, “Who’s Mugsy Morgan?”

The man looked at me and said, “Mugsy Morgan’s long gone now, but back in the days of prohibition, he was one of the most powerful mobsters this side of the Mississippi.”

And this was the story he told:

“Michael ‘Mugsy’ Morgan was the top boss of the city’s Irish Mafia. He and the Morgan Gang controlled the entire west side by 1920. The east side was controlled by the Italian Mafia’s Falcone Gang, led by Rocco Falcone. Throughout the 1920s, the Morgan and Falcone gangs had an on-and-off feud, trying to be in control of the entire city. Mugsy Morgan ran his gang out of his house, which led to his downfall.  In 1929, while having a meeting, members of the Falcone Gang broke in and massacred the entire Morgan Gang, including Mugsy himself. And just like that, Rocco Falcone and his gang were the top dogs in the city.  But old Rocco’s grip on the city was short-lived. In 1931, his partners double-crossed him and Rocco wound up sleeping with the fishes.”

After he was finished, the man said, “If I were you, I’d start looking for another place to live, That place, as far as I know, is still haunted by Mugsy’s ghost, as well as members of his gang.”  And with that he walked off with his dog. Now, I didn’t believe in ghosts, but Tara did, as both the house she grew up in, as well as her grandmother’s house, were haunted.

“Babe, maybe we shouldn’t move in,” she pleaded with me. “I mean, I’ve heard of Mugsy Morgan before, and all that stuff that man said did actually happen.”

Now, I should have just listened to Tara. I really should have. But I assured her everything would be fine, and that just because her childhood home and her grandma’s house were haunted didn’t mean that this one would be.

I would soon be proven wrong.

The first time things started happening was that same day. While Tara was in the kitchen, putting stuff away, I was up in the master bedroom putting away our clothes. I had just opened a box of my dress shirts when I had to use the bathroom. I was gone for a minute, and when I came back I saw that the box of dress shirts was gone. Even in the bathroom, I could still hear Tara putting stuff away in the kitchen downstairs.  I looked all over until I found them in the hallway linen closet. I was puzzled, but I was tired, and so just picked up the box and took it back to the bedroom.

Just as I was putting the last shirt away, I heard Tara scream. I ran downstairs and asked, “What’s wrong?”

Tara sobbed and said, “I saw a face outside the window! It was all pale and ghost-like.”

Thinking that the man I had talked to earlier was stalking us and may have had malicious intent, I went and found my gun, a Smith & Wesson .44 Magnum revolver that I used for protection – and yes, I have a permit. I went outside and began looking around, but I saw nobody. I calmed Tara down and said if that man, or whoever it was, came around again, I’d run him off and make sure he never came creeping around again.  However, things would get creepier.

For the next several months, Tara and I experienced many spooky things around the house. Things would go missing and turn up in odd places. We would hear sounds, like creaking floorboards and moans, or feel cold spots, and sometimes we would see a figure just in our peripheral vision, but when we’d turn around to get a better look, the figure would be gone. Tara would always chalk it up to ghosts, but I would always try to come up with a rational explanation, such as the house settling, old plumbing, drafts, and our eyes playing tricks on us. That was until Tara and I witnessed something that could not be explained away.

That night, Tara and I had gone out to have dinner with some friends and went to see a movie with them afterwards, so it was pretty late when we got home. We opened the door, turned on the light, and the whole house was different. The furniture was old and the walls, which had previously been off-white, were now a dark olive green color. We looked around, and to our right, we saw a red glow coming from under the door that led into the den. We walked to the door and opened it.

Seated around a table were the bloody shot-up bodies of men in old-style suits. Blood and brain matter was splattered all over the place, and bullet holes riddled the walls. Tara and I just stood there taking in the gory scene. One of the men sat at the far end of the table. He wore a brown suit and a green bowtie. Between Tara and I, we both knew that had to be Mugsy Morgan. Just then, Mugsy Morgan turned his head and opened his mouth to speak, but all that came out were gurgling sounds and blood. Just then the scene vanished and the house turned back to the way it was when we left it. Me and Tara soon got out of there and went to a motel.

We eventually moved into another house in a newly-built subdivision. Just recently I saw in the classifieds that the Morgan house is up for sale again… with the price drastically reduced.

I wonder how long it will be before the realtors decide to give up on that accursed house, and just let the city demolish it.

The Mystery of the Highball Mail 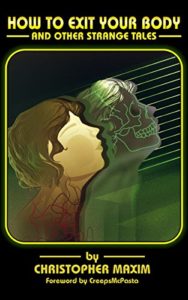