Posted at 11:00h in Strange and Unexplained by CreepypastaStories.com 0 Comments
📅 Published on March 29, 2020

“Some Shooting Stars Aren't Meant To Be Wished Upon”

There it was. A fragment of the universe, hurtling through the cosmos. And there I was, gazing up from the comfort of a farmhouse rooftop, built by my father’s hands smack dab in the middle of nowhere. In all the years we lived out there in the countryside, not a damned thing remarkable ever happened. This meteor shower was the highlight of my entire life, and that’s why, with a bit of wonder glazed over my eyes, I wished on that one shooting star, brighter than the rest. I wished for some excitement.

Almost as if an answer to my plea, the meteor took a U-turn and fell from the sky like a falcon diving for its prey. I watched, astonished, as it passed overhead and crashed into the wooded area behind my dad’s property. Surprisingly, there was no sound, no explosion; just the rustling of tree leaves as it plummeted through the forest’s canopy. To make matters more peculiar, I swear I could see a red glow emanating from the crash site, however faint.

After the initial shock wore off, I climbed down from the roof and raced into the woods as fast as my scrawny legs would allow. I had a rough idea of where the thing landed, so I darted in that direction, hoping I could take home a chunk of space rock as a souvenir to show my father. If I was lucky, it would be a treasure thrilling enough to keep him from getting mad that I went off into the woods by my lonesome. I could only hope.

Eventually, I came to a small clearing where the moonlight gently caressed the earth, granting me a somewhat clearer picture of the flora and fauna around me. I noticed many small animals, frantically scurrying north for no discernible reason. I surmised that the meteor’s landing frightened the wildlife nearby, and so I decided to head off in the opposite direction.

Sure enough, after maybe ten more minutes of my impromptu hike through the wilderness, I came upon the source of the mysterious red glow I’d seen before. It was no meteor. There, sitting in a small depression in the ground, was a metallic pod of sorts, complete with a blinking beacon protruding from its surface like an antenna. The craft itself was spherical and at least twice my height. I’d never seen anything like it before. I was utterly dumbfounded.

Before I could take a closer look, a hatch opened up from its side, startling me back into the woods. With a racing heart, I scuttled behind the nearest tree. I cautiously positioned my head around the trunk and spied on the object with bated breath. I didn’t know what to expect; was it some kind of top-secret military weapon? Or perhaps a remote-controlled gadget built by a genius hermit living nearby? Would a little green man step out to greet me, demanding to speak with my leader? No matter the outcome, my eyes were glued to that metallic pod, for better or for worse.

A dark violet ooze spilled from the object, forming a large puddle at its base. The slimy substance then scaled the pod, coating the exterior from top to bottom. As the slime moved around the sphere, the light above stopped blinking. All at once, the purple liquid was repelled from the craft and back onto the ground below. There, it began taking on a more humanoid shape.

As the ooze changed, so too did its color. It became white and fuzzy, not unlike television static. Appropriately enough, TV and radio dialogue soon filled the forest. This thing was collecting signals from thin air, regurgitating lines from popular programs long since broadcast. At least, that’s what it appeared to be doing.

My mouth agape in awe, I began leaning forward without realizing it. The signals ceased abruptly, and I fell, head-first, onto a pile of dead branches, creating a loud crunch. From my new vantage point, I watched the white figure turn in my direction. I then heard it speak.

Its voice was shaky and unnatural; a low, monotone growl coupled with a harsh reverb.

Scared for my life, I picked myself up and ran back home, faster than I had ever run before. I reclaimed my perch on the roof and carefully surveyed the property. Once I was sure I hadn’t been followed, I hopped through my bedroom window and climbed into bed, hoping that I dreamed the whole thing up; an adventure concocted by my imagination, running wild. I wished it were that simple, but wishful thinking rarely plays out in one’s favor.

The following day, I came downstairs to the familiar aroma of eggs and bacon. My father always cooked up a hearty breakfast on Sundays. The sight I was greeted with upon entering the dining room, however, was anything but familiar. There, sitting at the table across from my father, was a man in a clean-cut suit, wearing a bowler hat and a striped tie. We rarely entertained visitors, so I was more than a little perplexed.

“Son! This is Mr. Grovewood. His car broke down a couple of miles up the road, so he’s going to be staying with us for a few nights, just until he can get things sorted out.”

I remained silent, perturbed by the man’s presence and still shaken from the previous night.

“He’s paying us a generous sum to stay here, so you best treat him with respect.”

My dad glared at me in a way that effectively relayed his meaning. As such, I complied.

The man smiled, albeit awkwardly, and I ran off outside to tend to the farm. I didn’t know why, but I’d suddenly lost my appetite. Something just wasn’t adding up. How did this stranger find the farm after his car broke down? We were literally surrounded by forest. Dumb luck, perhaps? Doubtful. I was beginning to feel that his appearance the day after that thing landed in the woods wasn’t a mere coincidence, but this wasn’t a theory I had enough nerve to explore. After all, I had already convinced myself that the previous night’s events were nothing more than a bad dream. The man would be gone in a few days either way, so I tried not to dwell on it.

The next couple of nights were… bizarre. Mr. Grovewood attempted to watch a sitcom with us while eating dinner, but his reactions were less than normal. He seemed confused by the program and would only laugh after he noticed us laughing. And this wasn’t just any laughter, mind you – it was a loud guffaw of intensely uncomfortable proportions. I was almost relieved when he got pulled away by a phone call from a ‘business colleague’, though I didn’t hear a single word exchanged.

The following night, I walked downstairs to the kitchen for a glass of milk, only to find Mr. Grovewood chowing down on a raw steak from the freezer. I asked him about it, and all he said was, “It’s just a little midnight snack. Trust me; a little color does the body good.” Needless to say, I ran back to my room in a hurry, without my glass of milk.

Last night, however, is when I became truly afraid. Walking past the guest room to get to the bathroom, I overheard Mr. Grovewood on the phone. This time, I heard him speak.

MR. GROVEWOOD: Did you receive the information I transmitted?

MR. GROVEWOOD: Yes, this is the language we must use from here on out. We must avoid suspicion and blend in with the rest.

MR. GROVEWOOD: It’s a lovely place. Rich in minerals, water, and lifeforms. You and the others are going to like it here.

MR. GROVEWOOD: So long as you’re ready. There’s no going back from here. This will be our new home.

MR. GROVEWOOD: No need. Why waste the material on transports when I can beam you down instantaneously? I have two vessels here, ripe for the taking. 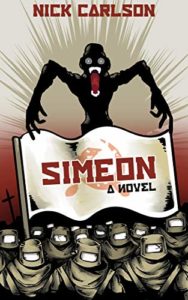