Posted at 11:00h in Artifacts and Objects, Deaths, Murders, and Disappearances, Folklore and Folktales, Illness and Injuries, Jobs and Occupations, Occult, Magic, and Witchcraft, Rites and Rituals, Strange and Unexplained by CreepypastaStories.com 1 Comment
📅 Published on April 23, 2020

The road is a light brown path of dirt that stretches up and down the shallow hills, running straight from end to end before becoming serpentine at its eastern end where it meets the main highway. Blades of grass struggle to break through but soon thereafter become dead and scattered. That road is a desolate one, surrounded by open fields and the occasional tree, upon which no leaves grow, and no colors brighten the day.

That road hasn’t been traversed in many a year, sitting sullen and undisturbed where it once was the main avenue, bustling and lively as the main strip through the town market. The people of the once-surrounding town would erect tents along the energetic thoroughfare to sell and trade their goods. Day in and day out, the market strip would attract all of the townspeople and folk from surrounding communities. It was this way for years.

Then one morning, as all the store owners arrived to open their businesses, a sound was heard in the distance. A number of sounds… trombones, drums, trumpets, flutes, and cheers. It was a fleeting sound, carried by the wind, there one moment and gone the next. That was the day that Howard Aberdeen came to town.

Howard Aberdeen was a small old man with a hunched back, teary eyes and a bulbous nose. He wore layered cloaks and walked with a limp, aided by a twisted cane carved from the branch of a tree. With the assistance of three silent women he referred to as his “thankful sisters”, Howard Aberdeen built a display on the small section of the side of the road that he leased. On the crudely constructed wooden shelves sat a myriad of objects, each one stranger than the last. Painted stones and glass, figures and shapes made of sticks held together by black string, various liquids of all colors, purported to be for any number of uses.

Perhaps the oddest item in Howard Aberdeen’s possession was one that most decidedly was not for sale, a small collection of papers, the contents of which only he and his three mute sisters knew the details. Every morning before the townspeople came to market, Howard would take his sisters to the top of the hill behind their store and read aloud from the pages, stopping whenever anyone came close enough to hear. And every morning, people would examine his goods; some would consider buying them, but few ever did. The ones that did purchase what Howard Aberdeen sold only did so for decoration, ignoring their seller’s claims that with them “bright light or deep darkness could be achieved”.

It was a bright Tuesday afternoon, the market full of people, when a tall girl of ten years inexplicably dropped to the ground outside Howard Aberdeen’s store. The townspeople rushed to the girl’s aid, but no one could ascertain what had happened to her, nor how to remedy it. Just then, old Howard Aberdeen hobbled his way through the crowd accompanied by his three silent sisters, and each of the four placed a stone next to the girl: at her head, her feet, and at both elbows. Howard Aberdeen himself placed a drop of a pink liquid on his index finger and proceeded to draw a shape on the girl’s forehead.

“Come back,” he muttered in a voice as much silk as it was gravel.

And the girl did just that. Her eyes opened and she sat up, a sweet smile across her lips. The townspeople rejoiced, confused but grateful. Showing the most gratitude was the girl’s father, who also happened to be the town’s mayor. After an abundance of thanks, the mayor declared that day ‘Aberdeen Day’, and asked what he could do for the aged vendor and his sisters. The old man gave it a quick thought, and decided that a celebration in his name would suffice. The mayor suggested a parade, which pleased Howard Aberdeen.

For the next several years, the Aberdeen Parade was a joyous occasion, with people from neighboring towns joining the festivities. People began to support Howard Aberdeen’s business more regularly, though continuing to use his products for mere decorations despite the power they’d seen them capable of firsthand. But the novelty wore off, and half a decade after Howard Aberdeen and his silent sisters had saved the mayor’s daughter, they were all but back to where they had begun, save for the young woman they’d saved coming around every day to express her gratitude.

That’s when the accidents began happening.

The townspeople quickly realized that the old man and his sisters were connected to the deaths, and a mob formed outside the Aberdeen home. Old, decrepit Howard Aberdeen calmly stepped outside to address the accusations.

“Aye!” he exclaimed proudly. “It was I! Myself and my three lovely companions! I saved one of your own, despite remaining on the outside of the townsfolk, much to my distaste. Do you fear me? Do you pity me? I did what I could to be a part of your community, but you sniggered at what we have to offer! Sure, some of you have purchased our wares, but for what? You’ve disregarded the bright lights and deep darkness you could have achieved! I have offered you great power and you have chuckled behind our backs! I even showed you the power we wield! You were appreciative, yes, for but a moment. Time crept along, and Mister Mayor, you seemed to forget that every year was to have an Aberdeen Day! Is that what your daughter’s life was worth? Two celebrations? No, no… hardly. Young lady, are you about the crowd?”

Despite the objections from the townspeople, the mayor’s daughter cautiously approached Howard Aberdeen.

“You needn’t be afraid, my dear. I’ve saved you once before, why should I negate that now, when you’ve been the kindest of all those here today? I wish to save you once again. Come now, dear.”

The daughter gave Howard Aberdeen a curious look, but obliged him. Once she was within an arm’s reach of the old man, he placed a drop of a black liquid on his index finger. He then drew a circle on her forehead and politely dismissed her, not telling her what it was he’d just done. The mayor of the town exclaimed, shouting threats that were echoed by the rest of his constituents.

“Is that what you presume to do to me? I think you’ll find that most difficult. I would like to remind you, a parade a year would have saved you all!” Howard Aberdeen bowed his head.

The townspeople began screaming as their flesh melted from their bones. Their teeth turned to liquid, their eyes to tears in their own right, their tongues to puddles. They sizzled and they cracked, they popped and they dripped, and before long, the puddles of people seemed to evaporate into thin air, clothing and all. Only the mayor’s daughter was left, crying in the fetal position. Each of Howard Aberdeen’s three sisters bent down and picked up the three small stones they’d placed discreetly around the crowd of angry townsfolk. The old man stepped slowly to the girl.

“I told you I’d saved you again, my dear. I do believe it’s time to move on to another town now, perhaps one that is more appreciative than this one, or the previous one, or the one before that. Will you join me?”

The mayor’s daughter looked up with tears streaming down her face and nodded her head.

“T-Thank you…” she muttered.

“Always grateful, you are! And will you always be so?” Howard Aberdeen asked her. The girl nodded her head.

“And I believe you, I truly do. But it is a chance I mustn’t take.”

Two of the silent sisters grabbed the mayor’s daughter and held her in place while the third removed her tongue. The girl screamed out in pain and flailed about wildly, but a drop of a green liquid in her mouth soothed away the pain. The girl was escorted into Howard Aberdeen’s home, where upon the table a number of different liquids and powders sat in readiness. All of the items were placed inside a stone bowl, followed by the daughter’s tongue.

Howard Aberdeen read from the pages he always kept close, and the contents of the bowl burst into a flame of a thousand colors, burning for a moment before extinguishing itself, leaving the bowl clean and empty. The group of five walked outside, where the mayor’s daughter couldn’t believe her eyes. A line of people stretched back for as far as she could see, each holding an instrument. Some were dressed in clothing from biblical times, other in ancestral African garb, others yet in full suits of medieval armor. Her own father, now ghastly pale, almost translucent, stood with a trombone, eyes forward.

“And on and on we go, my loves,” Howard Aberdeen said.

And the parade marched on down the road, all led by old Howard Aberdeen and his four silent sisters. They faded into thin air as they moved, but the sound of lively music continued to permeate the air. No one has seen the Aberdeen Parade since, but Howard Aberdeen always wants his celebration, it’s just a matter of finding the best musicians.

And Howard Aberdeen is surely due for another parade.

The Value of the Human Soul

Do You Want Some Candy?

The Worst Thing In The World 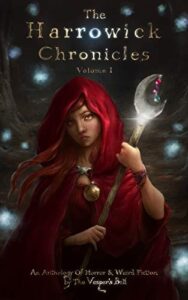