Posted at 11:00h in Strange and Unexplained by CreepypastaStories.com 1 Comment
📅 Published on September 5, 2020

Kel and Sidney sat in near-perfect silence, taking turns to draw from a handle of vodka that they shared between them. The bottle of liquor was one of the most expensive ones left at the corner shop. It hadn’t mattered that it was expensive, because the storefronts had all been abandoned more than a week ago. While scavenging, Sidney had noticed the premium alcohol tucked secretively behind the counter. He took it with him and saved it for tonight.

“Does it taste like three hundred dollar vodka?” Sidney asked. He was trying to be friendly despite his fear.

“It tastes expensive to me,” Kel answered. “But I’m not an expert.” He passed the bottle back, and continued staring at the television. There were no live broadcasts anymore, but there were countless old videotapes for them to watch. They had siphoned more than enough diesel, too. It would suffice in powering their generator during those last hours of the world’s existence.

“Thanks for spending the last day over here,” said Sidney. “It would be awful to be alone.”

“Same,” Kel answered. “I’m glad to have somebody around.”

“—and I’ve been meaning to tell you something!” Sidney segued suddenly. It was clumsy, and it made Kel turn his head away in embarrassment. He knew that Sidney was going to say something overly sentimental, and his friend did not disappoint him. “I think you’re the most genuine friend I have in this world.”

“In this world, while it lasts for another eight hours,” Kel deflected. “What movie should we watch next?”

“I said that I want to talk to you about something,” Sidney repeated. Kel hid his face in his hands. Muffled by his fingers, he asked:

“Save it then,” Kel quietly implored him.  “Don’t say it. Just save it instead, Sidney. We’ll be dead in the morning whether you say it or not.”

“But you’re my friend, Kel,” Sidney pressed. “I don’t want to have secrets from you. I want to die with nothing bad hidden inside me. If I can pass away in the morning along with everyone else, and if I can go while holding nothing secret from the people I care about, then it’ll be a good death for me. It’ll be a happy death, Kel, and that’s a rare thing. I just need to tell you something. I need you to hear it.”

“Well, my ‘happy’ death involves no new headaches,” Kel persisted. “Don’t do anything to spoil that for me. Please.” They sat in silence after that, and then discussed which movie they should watch next. They watched another old favorite, speaking only to comment on their favorite scenes or to rehash pet theories about the plot. When it was over, Sidney once again broached the subject that was on his mind.

“I’m just so afraid of dying alone,” he blurted out. It was apropos of nothing, except of course that death would come for everyone tomorrow morning. “I’m glad we’re all passing away together. Or… I’m sorry. I don’t mean it exactly like that. I’m not glad that we’re dying, but the fact that we’re all going at the same time is reassuring to me. There’s unity to it, and that’s got me thinking about the truth. Does that make any sense to you?”

“I suppose it does. Yeah… It makes sense. I’ll admit that it feels a little better to know we’re all going out together.”

“But a new secret might burden me,” Kel interrupted. “You understand that, too. Don’t you? You take a weight off your own shoulders, but you’ll put it on me instead.” Sidney considered this, but then said something that surprised Kel.

“I can tell you without your permission.” Sidney looked deadly serious when he said it, and it disturbed his friend to see such an expression on his face.

“Would you really do that to me?” Kel asked.

“I don’t want to do anything to you,” Sidney answered. “I wish that you’d invite me to talk to you, instead.”

“You want permission to burden me?”

“You don’t even know what I’m going to say.”

“But I can sense that it will be painful for me.”

“Will you please give me permission to tell you?”

“You’re coercing me already. You’ve already taken advantage.” Kel’s words made Sidney fall silent again. When Sidney finally spoke, he looked Kel in the eyes as though baring his soul.

“I played your lottery numbers three years ago – back when they won. I bought one ticket for you and one for myself. I played our numbers; same as always. I told you that I didn’t buy our tickets that week, but I actually did.” Sidney fell into silence and waited for his friend to respond. Kel only flinched, took a deep breath, and then said:

“I remembered to buy the ticket. I just never gave you the winnings, Kel. I never shared them. I’m so, so sorry.” Sidney watched the second hand on the clock at the far side of the room. It made its paces for more than three minutes, until Kel spoke again.

“I could have saved my mom with that money, Sidney. We could have afforded specialists her insurance didn’t cover. I might have been able to save her.” He sucked his teeth and grimaced. “At least I wouldn’t have had to keep working while I was trying to spend my last days with her…” That was all Kel said, and Sidney observed that his normally placid face was trembling.

“Can you forgive me, Kel?” Sidney asked it with a shy note of expectancy in his voice, as though in his naivety he really thought he might be absolved. Kel turned and stared at Sidney with a look on his face as though he might say something. Instead, the muscles at the base of his neck tensed and then shifted as his hands slid silently upward. Sidney put his own hands up meekly. He remained unsure about what was happening to him. Kel brushed past Sidney’s defense without much effort as his fingers found places to cinch around Sidney’s throat.

“The money doesn’t matter anymore,” Kel said. “Only time does. I might have lost time with my mother, and now there’s no time left.” He spoke with a deadness that terrified Sidney. The strangled man’s windpipe wasn’t completely obstructed. He wheezed in a thin stream of air, and then spoke in reply.

“I know you are,” Kel said. His grip tightened.

“Please, Kel. I don’t want to die yet.” That was the last thing Sidney could say. There wasn’t enough strength left in him.

“I know you don’t.” Kel throttled Sidney’s neck with a final wrench of force, and then Kel was alone. He took a deep breath, then raised himself off the floor and sought out the bottle of vodka. He drank from it. The sun would rise in another two hours, and then it would be all over.

The Disappearance of Braden Kelly

I Knocked on Death’s Door 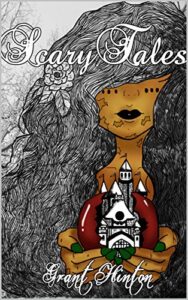