Posted at 11:00h in Strange and Unexplained by CreepypastaStories.com 1 Comment
📅 Published on March 11, 2021

I was tucking my daughter into bed one night last week.  Normally, she’s a huge hassle to make go to bed, but that night she seemed actually eager to go to sleep.  I sat down in the chair beside her bed and asked her what story she wanted me to read.  She smiled at me, but didn’t say anything.

“I Can Read With My Eyes Shut?”

“I wanna tell a story tonight!” she exclaimed with an enthusiasm I was unused to.

She scrambled out from under her covers and climbed into my lap.

“It’s ‘bout a man,” she said, looking at me with a sudden intensity.  “Every night he walks down the street.  He wears a big, red coat.  In his pockets, he’s got a paper with a list of names on it.”

She lowered her voice to a whisper briefly.  “It’s a list of bad children.  They threw a tantrum, or they dumped their dinner on the floor, or they smacked their little sister on the face and made her cry.”

“You mean Santa Claus?” I asked.

“He walks down a different street every night.  He’s got his list of kids and what bad things they done that day.  Sometimes, he ends up walkin’ down the street where one of those bad kids lives.  If he does, he stops at their house.  He doesn’t hafta check his list; he just knows who’s on it and if it’s their house.”

“If he comes to your house,” she said, pointing at me, “he’ll open the front door, even if it’s locked.  He comes in and looks at the photos of you on the walls.  He goes into your bedroom and stands by your bed.  His hands are always in his pockets because his fingers are really long and scare people.  But when he finds you, he takes his hands out of his pockets and covers your face with them.”

She demonstrated this to me by putting her own small hands over her face.

“He puts his hands on your face so you can’t breathe.  You can’t even feel him doin’ it ‘cause you’re asleep.  He keeps ‘em there ‘til you’re dead!  Then he takes his list out and crosses your name offa it.   Then he leaves, and nobody knows he was even there.”

She concluded the awful tale by crossing her arms and declaring matter-of-factly, “That’s why you gotta be good every day, ‘cause you never know if the man in the red coat is gonna walk down your street that night.”

We sat there beside her bed in silence for a moment. She beamed proudly, while I felt like all the blood was draining from my head.

“Only if you’re a bad kid,” she replied.

I wondered how confidently she’d have said those words if she’d thrown one of her usual tantrums that day.  It suddenly occurred to me that she’d been particularly well-behaved all night, and wondered if this macabre story was the key.  I tucked her in with a hug and a kiss and went to trade places with my wife, who was dealing with our other daughter, a toddler who won’t go to sleep unless you snuggle her for about an hour.

Later, with both kids down, I sat on the couch with my wife while she watched one of her shows and asked during a commercial, “Did Katie tell you her story?”

“No, we read Little House in the Big Woods.”

“Did you tell her a story about a man who kills bad children?”

The show came back on, so nothing more was said on the subject, but it nagged at me the rest of the night.  As passionate as I am about horror, I make sure to pad any scary stories I tell my daughter with a bit of humor.  I don’t want her afraid of the dark; I just want to nurture her imagination and creativity, you know?

The next day, we were drawing together.  She likes to have me draw cartoon characters, and then she colors them in with her crayons.  At one point, she came up and held a piece of paper over her face and yelled “BOO!” at me while I was at my desk.  She had drawn this cartoony kind of face on her own.  It looked to me somewhat like Ernie from Sesame Street.

She paused for a moment, as if trying to come up with a name.

“It’s a zombie,” she finally declared.

“Oooh, scary!  What’s that line coming out of its mouth?”

She drew me another picture after that, I thought it was a female version of the same face, but she had added a smaller drawing of a head beside it.  I took both these drawings to work and have them hanging up by my desk.

A few nights later, after we had gotten her ready for bed, she declared to me once again that she had a story to tell me.  I set down the books I had pulled from her shelf and sat down in the chair by her bed.  Once again, she crawled into my lap, sat up straight and looked me right in the eyes.

“Is it about the man in the red coat?” I asked.

“She’s got a little boy.  But then she died, and the daddy and the little boy moved away.”

“She looks for him every night.”

“I thought you said she died?”

She just looked at me, and I could see in her eyes that she was not making this story up as she went, but reciting it to me and trying to figure out the answer to my question.  She put her hand on her chin for a moment in an almost grown-up way.

“She’s a ghost,” she finally declared.

“She came back to her home, but her little boy was gone, so she went lookin’ for him.”

“No, she’s always lookin’.  She can’t drive a car, so she’s gotta walk, and it’s real far, and she doesn’t even know where to go.  So she just walks.  She’s got blood on her feet ‘cause her feet get hurt from all the walkin’.  If she hears a baby cryin’, she starts cryin’ too.  Sometimes, she’ll cry for hours after hearin’ a baby cry.”

“If she sees a child out at night, she gets confused and thinks it’s her little boy.  She’ll run up and try to grab the little kid right out of its parents’ arms.  If the kid is alone, she’ll snatch it up and carry it off.  Those ones are never found.  She always comes back ‘cause she hasn’t found her boy.  She might not even recognize him anymore ‘cause she’s been dead for so long!”

“How long has she been dead?” I asked.

“How did she die?”  I don’t really know why I asked that question.

“She cut herself and then lost all her blood.”

That was too much.  I didn’t like that she knew these stories.  I was upset that someone had told her these awful things.

“Who told you that story?” I asked in my most serious voice.

She looked away for a moment, and I thought I had frightened her with my tone.  It took me a moment to realize she was looking at the window on the far end of her bed.  Outside it was dark, but I could see the trees at the edge of our backyard being blown about by the wind.  I waited, then shook her slightly to break the spell that the window seemed to have her under.

She suddenly looked scared and upset, like she was going to cry.

“I’m sorry!” she wailed and hugged me tightly.

“Sorry for what?” I asked, rubbing her back gently to calm her.  Her little hands gripped my shirt, and I realized she was shaking.

I hugged her even tighter.  “You weren’t bad. Nothing’s going to happen to you.  What stranger did you talk to?”

“The man who came to my window.  He told me the stories.”

Her words made me freeze.  We live on the second floor of a duplex.  I got up, setting my daughter on her bed.  She cried and begged me not to leave, but I hushed her.  I walked across the room to the window.  It was shut, but the wind was howling so fiercely you could hear it through two panes of glass.  Outside, across the back yard was dense woods.  The trees seemed to shake their branches at me menacingly.

“What did he look like?” I said, trying to sound calm.

I thought about the drawings she had made.  I get chills even now as I look at it and write this.  That simple line for a tongue suddenly seemed snake-like to me.  Those eyes a little too frightening.  She had drawn people before, but they never had the same look as these drawings.

That’s when I noticed the marks on the window’s glass.  It looked like something sharp had been dragged down it, like the edge of a coin or a rock.  Four jagged lines, a finger’s space apart, crisscrossing repeatedly in one spot against the window. And at the bottom, four deep grooves in the wooden pane. 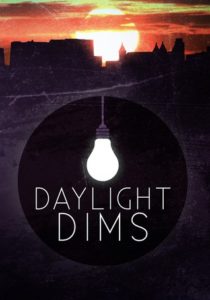 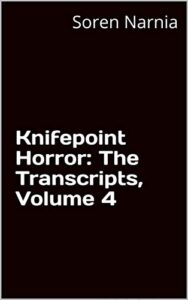