Posted at 13:00h in Strange and Unexplained by CreepypastaStories.com 0 Comments
📅 Published on April 17, 2021

I cannot share all the details of what happened on March 3rd, 2018.  As a doctor, I’m not allowed to share certain private details, so names have been changed, and I do not mention what hospital I worked at at the time.  There has to be some sort of logical explanation as to what happened.

So far, I haven’t come up with any.  Here are my notes I took that night.  Three people are dead because of that woman’s presence.  And I need to find a reason why so I can continue going on with life.  Everything has to have a rational reason.  Or so I thought.

Jane Doe was brought in about ten minutes prior.  Age is somewhere in her early twenties.  She would be quite tall when standing, almost six foot two.  She’s African American with two mirror injuries between her shoulder blades.  The skin has been taken clean off and seems to be done expertly; I believe someone may have been trying to skin her, possibly to hide an identifying mark like a tattoo.

Jane Doe was found walking naked down a street in a daze.  She was found by two young women who took her immediately to the emergency room.  By the time they reached it, Jane was unconscious and unresponsive.  I hold high hopes for her recovery, as other than the injuries on her back, she seems to be perfectly healthy.

Had to calm down Derek Peterson again.  Peterson woke up screaming about demons and had to be given a sedative.  He really needs a transfer to a proper mental ward, but his parents only want him to be treated for his injuries before he’s sent home.  Like this time and every other time.

Jane Doe has awoken.  She seems to be all right in mind but claims to not remember who she is and what happened to her.  I have reason to believe she’s lying, but it appears she’s gone through some form of trauma, and I don’t believe she’s ready to relive it.  I’ve ordered a rape kit, but she doesn’t appear to show the typical signs of sexual assault other than being found nude.

The storm is picking up.  I’m going to get a migraine from this.

Jane Doe somehow escaped from her room and ended up in the room of Agnes Church.  She was sitting by the elderly woman and stroking her hand, almost comfortingly.  I managed to guide Jane back to her room and apologized to Agnes, but Agnes had already fallen back asleep.  I imagine that’s really all that’s left for her, sleep.

Jane has been put back in her room, and I’ve assigned a nurse to her door.  We can’t have her wandering around the hospital; she could hurt herself.

Agnes passed away not five minutes ago.  I cannot seem to shake off this odd chill about the uncanny timing of her meeting Jane and her death, but it is circumstantial.  Agnes hasn’t been right for days; I knew her end was coming soon.  I’ll miss playing board games with her on the weekends.  If there’s a heaven, she’s likely playing Yahtzee with the angels now and somehow winning every time, even if it is a luck game.

Jane got out of her room again.  The nurse left to use the bathroom, and by the time she got back, Jane was gone…because she was in my office.

She’s incredibly sweet; all she wanted to tell me was that she remembered her name – Leah.  I am not the kind of man to get so captivated with his patients, but something about Leah tugs at my heart.  I suppose she reminds me of my sister before the cancer weakened her spirit.  I took Leah back to her room and told her that she shouldn’t leave until we can find someone she knows.

She seemed mildly agitated with this, but she did not object.

This shouldn’t have happened.  One moment he was enjoying TV while chattering the ear off of the nurse who was checking his bandages when, as she describes, ‘his eyes rolled back in his skull, and he fell backward, choking and thrashing about.’ We tried to save him, but he was gone within minutes.  It was like his body just ceased.

I’m going over his treatment, but he wasn’t allergic to any of the medications we gave him, and other than his mental disorders he was perfectly healthy.

Leah tried to get out during the chaos, but I managed to catch her before she left her wing.  She said she wanted outside for a breath of fresh air, but I have no doubt if she leaves this hospital, we will never see her again. We’re still trying to get a positive ID on her; there are no girls in the area matching her description with the name Leah who have been reported missing.  We might have to widen our search.

The storm’s only getting worse.  I think there’s something wrong with the air because I’ve had no less than two bloody noses tonight, and my head is pounding.

Once again, Leah tried to escape.  She’s begged to be released and claims she remembers how to get home, but she cannot name an address nor any relatives who can pick her up.  She still doesn’t remember her own surname.  The police here now are trying to ID her.

I just got word.  She escaped again.

Leah was found attempting to get to the roof. She claims that’s the way home. We’ve now had to restrain her to the bed as she is now classified as a suicide risk. Officer Matthew Reynolds said she had taken off her hospital gown and was about to jump when he tackled her. I’m thankful she didn’t succeed with her attempt to kill herself but I’m worried she’ll try again.

Reynolds is dead. He just dropped in the hallway. Just like Derek.

I have an unsettling feeling that Leah may be connected to this.

The power was knocked out by the storm, we’re running off of generators now.  The lights are constantly flickering.  Two nurses have fainted, thankfully not dead, but both experiencing bloody noses and migraines.  I can feel my own head start to pound.

I swear there’s blood pattering against the window, but that’s impossible.  I might need to go home.  Or go to the emergency room.

Birds are flying into the windows.  Like drawn to a beacon they’re flying to the building, smacking against the glass and falling to the ground dead.  The sound certainly isn’t helping my head.

I need to talk to Leah, but I believe she’s asleep and is under guard by two officers.

It’s foolish to believe that this girl could be causing such madness, but I don’t know what else to think.

The officers have fallen unconscious and Leah is nowhere to be found.

I was found on the roof unconscious shortly after I wrote that nonsense message in my notes.  My face was apparently covered in blood and they thought I might be dead, but I survived the experience…whatever that experience was.

I must have hallucinated everything, but I shall take note of it anyway.  I found Leah standing on the edge of the roof, once again nude and staring at the sky.  She turned to look at me.

Her voice was hollow, tired.  Lightning flashed, and I swore I saw something on her back, illuminated by the lightning.

I tried to talk her down, show her there’s a better way, but she shook her head.

She jumped then.  I ran to the edge of the roof and peered over the ledge.  I saw Leah’s body on the ground.

But I saw her also stand, brush herself off like she’d suffered a minor fall.  She looked up at me, and I became overwhelmed with grief.  I wept.  I cried as she raised her head to the sky and screamed at the top of her lungs.  The sound of loss, the sound of heartbreak.

I must have passed out then because that’s all I remember.  Thankfully I seem no worse for wear and will likely return to work in a few days.

Leah is missing, but there is no sign of her body either.

I think she’s going to spend the rest of eternity trying to find a way home.

I Stole My Stories

The Demon in the White Suit

A Year and a Day in Priorville

Every Year on My Birthday, I Have to Die

There’s a Boy on My Bus That Smells of Death 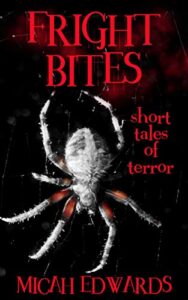