Posted at 11:00h in Strange and Unexplained by CreepypastaStories.com 1 Comment
📅 Published on April 28, 2020

An old man lived alone in a house by the ocean. Every morning as the sun rose, he walked down the forest path to the beach and enjoyed the salty air coming off the water. Every evening, he returned to the shore to watch the sunset reflected off the water. He was a widower, with a grown son who lived in town, but he never felt sad or lonely for the ocean was his companion.

One morning as he walked along the shoreline, the old man noticed something half-buried in seaweed and foam. Curious, he picked the object up and rinsed it off in the water. To his surprise, it was a human foot, cleanly severed above the ankle.

He hurried back home with the appendage to telephone the authorities, but once he got there found that he couldn’t bring himself to place the call. Something about the foot mesmerized him. It was small and delicate, and the skin was pale like marble, with red nail polish on the toes. The old man wondered who it belonged to.

That night, the widower heard a knock at the door. Standing under the moth-covered light of the front porch was a woman in a gray cloak, her face concealed by the hood.

The visitor’s voice was gentle and soft. “I’m looking for somebody.”

“Who are you looking for?” he asked.

Before she answered, the old man awoke to find himself in bed and realized that the encounter was just a dream. He had never had such a vivid dream before; it felt so real that it puzzled him, and he struggled to get back to sleep.

The following morning, the widower took the path down to the shore for his morning constitutional, only to find that another body part had washed up. It was an arm, long and slender, neatly severed at both shoulder and wrist. Without thinking, the old man gathered up the limb, rinsed it off in the cold water, then scuttled back up the forest path to his house before anyone else came by. He placed it beside the foot, suspecting that both parts came from the same person.

I wonder if more will show up, he thought.

That night, he had the same dream of the woman in gray. Once again she came to the door looking for somebody, and when he asked who, he immediately awoke feeling disoriented and confused. As before, he found it difficult to go back to sleep; the desire to know her name and who she was looking for began to eat at his sanity.

Every day after that, another piece washed up on shore. A leg, its pale flesh glistening in the salty water, then a hand, small and delicate. Another arm, another foot, the pieces kept washing up with the tide, cold and dead and beautiful.

And every night he dreamed the same dream. Each time the woman in gray would knock at his door, he would answer, and she would tell him that she was looking for someone. Each time, the dream ended immediately after, denying him the opportunity to see her face. It gnawed at him, and he’d spend the rest of the night tossing and turning, trying to return to the dream, but never able. He knew that somehow the dreams and the body parts were linked, and he started to suspect the dreams were in fact premonitions.

She must have a friend who is looking for her, he thought.

Then a morning came where the old man awoke to realize he had overslept. The sun was already high overhead, and the day had progressed without him. Panicked, the widower tossed on a coat and a pair of slippers to hurry down to the shore. Over the course of the past week, he had managed to piece together almost an entire human body. The only thing missing was the head, which he had been highly anticipating washing up that very day.

But there was nothing there when he got to the ocean. No head, perfectly severed at the neck, long tresses of dark hair covering its cold, dead face like he imagined. The beach was bare save the footprints of other walkers, and the old man became horrified at the thought that someone else may have found the head before him. In his mind, twisted by days of collecting the pieces of a dismembered corpse, he suspected everyone he knew.

“Curse my neighbors,” he hissed to himself. “One of them must have it.”

He spent the rest of the day pacing back and forth down the beach, tearing at his hair trying to decide what to do. When lunchtime came, he remained by the water, unable to even think of eating. When the evening set in, he watched the sun set on the horizon across the water, but it did not give him joy. It wasn’t until the cold of night began to descend on him that he returned home, miserable and suddenly feeling lonelier than he had in many years.

I can’t do this anymore, he thought, I need to be rid of these body parts.

He picked up the phone and dialed his son who lived in town, ready to finally let someone in on what he had found. Just as his son picked up on the other end of the line, there came a rap at the door. Instead of speaking, the old man hung up and walked in a trance to answer the knock.

There stood the woman from his dreams. Her face was still concealed by the hood of the large, gray cloak she wore. She didn’t move or speak a word. It was the moment he had been waiting over a week for, and yet now that it was before him, the old man felt overwhelmed with fear. He hesitated, his mind a flurry of questions. Was he dreaming? Would he wake up and find that the entire day had been in his head? Was she really here? Who was she?

“I’m looking for somebody,” she repeated, following the script of his dream.

And suddenly he knew, as if lightning had struck him, she wasn’t just looking for somebody, she was looking for some body. Slowly, he looked down at her feet but saw none. His eyes ran back up her form and realized there was no form under the gray cloak she wore. There was nothing at all. Behind him, the phone began to ring, but he was too stricken with fear to move from the door. Terror lumped in his throat as he reached out to throw back her hood and finally see the long, dark tresses hanging down across her cold, dead eyes.

The next morning, the old man’s son came calling. His father had rung him on the phone but hung up before they could chat. It worried him that when he called back his father did not pick up. The front door lay unlocked and wide open, the house empty. The young man searched high and low but found no sign of his father.

Maybe he’s gone for a walk down by the ocean like he often does, the son thought. He followed the forest path down to the beach. His father was not to be found. The only other person there was a quiet, young woman sitting in the sand, looking out at the waves. She wore a long, gray cloak that covered her completely.

“Excuse me,” the son said, “I’m looking for somebody.”

“Who are you looking for?” the woman asked. Her voice was gentle. She idly wiggled her toes, getting sand all over her red nail polish.

“My father,” the son replied, “he often likes to take a walk down here in the morning.”

“I haven’t seen anyone but you.”

Something about her filled the young man with unease. “Alright, well thank you.”

As he headed back up toward the forest path, the young woman called to him. “I’m sure he’ll turn up sooner or later. People always do.”

The young man returned to his father’s house to wait. He never saw the woman in the gray cloak again. But she was right. Within a week, his father was found.

First, his foot washed up on shore.

The Misfortune of an Unwanted Visitor 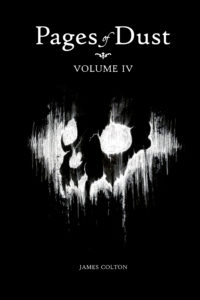