12 Sep The Man in the Attic

Posted at 11:00h in Strange and Unexplained by CreepypastaStories.com 0 Comments
📅 Published on September 12, 2020

“The Man in the Attic”

When I was 14 years old, I did what many my age do to earn a bit more cash, I babysat for friends of my parents. It was in November when my father introduced me to a new coworker of his, Mr. D. The D’s were new to town and needed a sitter to watch their 4-year-old daughter Rachel while they attended a function at the college my dad and Mr. D taught at. I needed the money and had nothing planned that night anyway, so I agreed.

The D’s new home was a brick red Victorian-style house at the end of a windy cul-de-sac on the other side of town. The school I went to was a couple of streets over, but despite my extensive exploration of the town on my bike over the years, I’d never actually been down that street.

I remember the wind was really frigid and starting to pick up when I finally got there on my bike early that evening. The sun hadn’t gone down yet, so the house seemed rather innocuous. They had about a half dozen garbage bags full of leaves at the curbside, and their lawn was pretty immaculate. There was a big oak tree in the front yard that obscured most of the upstairs windows.

I was given the usual tour of the ground floor: kitchen, living room, dining room, bathroom, etc., along with a quick stop in Rachel’s bedroom to show me her laid-out pajamas and favorite books to have read. The D’s wrote down a number I could reach them at (this was before cell phones were commonplace) and the emergency numbers, even though I had those memorized already. Then they put on their jackets, kissed Rachel goodnight, and left.

Most of the evening was uneventful. The D’s had bought a frozen dinner for me to microwave when Rachel got hungry, and Rachel was quite happy making her stuffed animals perform skits for my entertainment while I tried to get my homework done. It was later, while Rachel was drawing pictures with her crayons, that things got weird.

First, it was an old house, and with the wind outside, things creaked a lot. It was blowing so hard you could hear it howling through the windows. I was worried the noises would scare Rachel (I was already feeling anxious myself), so I kept trying to reassure her that it was just the wind and the house, and don’t be scared. She just shrugged and said she wasn’t. What a trooper. I was sitting on the floor, leaning back against the couch and Rachel was knelt by a coffee table with her crayon box and a pad of paper. I stopped reading and listened to the creaks and groans of the house. It almost sounded like someone was moving upstairs, walking around in the room above us. I tried to ignore it by playing with Rachel. She loaned me a piece of paper and I tried my best to draw a kitty. She was doing scribbles and spirals, the typical 4-year-old’s drawing. I asked her what her drawing was of.

I was taken aback.

I looked over at the stairs to the second floor and got prickles on my neck.

“Does the man in the attic have a name?” I asked nervously. I was hoping this was just an imaginary friend she was talking about.

The conversation was making me tense, so I decided it all a game she was playing and went back to drawing, but not before I had moved so I didn’t have my back to the stairs. Rachel just hummed and finished her drawing, smiling brightly as she presented it to me to keep. Afterward, she went back to playing with her stuffed animals. My ears seemed more highly sensitive now, listening to every creak of the house and whistle the wind made. Then I started paying attention to Rachel and her animals.

“What are you doing?” Rachel had her teddy bear ask the tawny cat in a deep voice.

“Looking for a spare pillow!” squeaked the tawny cat.

“I TOLD YOU NOT TO TOUCH MY THINGS!” bellowed Rachel loudly and then the teddy bear smacked the tawny cat on the head. I flinched at the sudden violence, even though they were just toys. Rachel didn’t stop… the bear kept hitting the cat as she made it yell “HOW-MANY-TIMES-DO-I HAVE-TO-TELL-YOU-TO-STAY-OUT-OF-MY-THINGS? THIS WILL BE THE LAST TIME!” I stopped her quickly.

“Rachel!” I yelled, shocked. She was taken by surprise. “Did you hear that conversation somewhere?”

Rachel hung her head down, looking at me, hugging the teddy bear, then cast her eyes upward toward the ceiling briefly.

“Mommy and daddy?” I asked anxiously.

I bristled. “The man in the attic?” I realized I was whispering. Rachel looked at me quietly, her chin still down, and nodded briefly. The house suddenly felt infinitely more inhospitable. It was like at that moment, the walls started leaning in toward us. No more than a second after Rachel nodded, there came a creaking right over our heads and we both jumped. The lights flickered and Rachel ran into my arms. It felt like my heart was in my throat. Despite the fact that all my courage had just fled, I felt it was my duty as the protector to make sure the house was safe.

“Do you know where Mommy and Daddy keep a flashlight?” I asked Rachel. She showed me where one was kept in the kitchen. I turned on the television for her and she quickly forgot all her worries and sat down in front of it, mesmerized.

I made my way cautiously up to the second floor, turning on every light along the way. Rachel’s room was just to the left at the top of the stairs, the bathroom beside it. To the right was some sort of study, a closed door that I think was the master bedroom, and then a long hallway that ended at an unpainted wooden door that I immediately assumed was the door to the attic. First, I checked Rachel’s room. I found a whiffle bat and brandished it for protection as I made my way down the hall to the attic door.

The door opened to a set of stairs that curved immediately right, and ended at a drop-down door that I had to double over and get my back under to push up and open. It opened to darkness, so I flicked on the flashlight. It was a weak beam, but it was better than nothing. I peeked my head up into the attic and held aloft my whiffle bat and flashlight, scanning the area. There seemed to be limitless cobwebs and dust everywhere. The wind howled harder and I about gave up right there to fast walk my ass back to the living room, but something caught my eye. I went up into the attic.

In the farthest corner of the room was a large trunk, about two feet high with a curved top. It looked just like a movie pirate’s treasure chest. There was a padlock on the latch, but it wasn’t closed, so I set down the bat, took the padlock off, and opened the chest. Inside were a bunch of bundled up, filthy clothes and a small stack of bound books that looked like journals. I held the flashlight over the chest as I rummaged slowly through the clothes. My grip fell on something heavy wrapped in a stained oilcloth. As I picked it up, the cloth fell away… it was a big iron wrench.

That’s when the trunk slammed shut like someone had thrown their entire weight against it. If it hadn’t been for the flashlight I was using to see, I might have lost some fingers. Instead, the lid banged hard on the flashlight and I jerked both hands back. It was suddenly really dark, what with the flashlight half stuck in the trunk, and I was scared shitless, so I bolted for the hole in the floor, where I could see a sliver of light from the downstairs hallway. As I hit the bottom step, the drop-down door slammed shut as hard as the chest had. I threw the hallway door shut behind me and bolted for the stairs and back down to the living room, where I grabbed Rachel and hugged her tight to me and curled up on the sofa together. I held her tiny body against mine for the rest of the evening. Eventually, I felt her fall asleep in my arms. Despite my adrenaline rush earlier, I started to feel overwhelmed with grogginess.

We were both sound asleep when Mr. and Mrs. D returned. Mr. D carried her off to bed while Mrs. D paid me and asked the usual questions as to how things went. Mr. D came back downstairs as I was heading for the door. I couldn’t wait to get out of that house.

“Oh, I’m sorry,” I said, stopping in the doorway.  “I thought I heard a noise in the attic, so I went to look. I think I left your flashlight up there.”

Mr. D got a strange look on his face.

“Are you joking?” he asked.

“The attic’s been locked tight since we moved here,” he explained. “The door has a bolt that’s been set from the inside and the Realtor couldn’t find a key for it.”

He and his wife looked at each other and then at me. They were both frowning. Mr. D went into the kitchen and a minute later returned to the front door. In his hand was the flashlight. He looked at Mrs. D again, then at me, and I saw it in his expression… amusement mixed with incredulity.

“Somebody had a bad dream,” he said condescendingly.

I tucked up my bottom lip, shrugged my backpack over my shoulder, and got on my bike. As I pedaled away, something made me glance over my shoulder. Through the branches of the oak tree, the attic window was dark, but in the second I looked, there seemed to be a shift in the blackness, as if some dark shape was moving away from the glass. I spent the bike ride home convincing myself that what I had seen was a reflection of the moon.

When the D’s asked if I could babysit again the following month, I politely declined.

For Goodness’ Sake (Part 2): Not So Silent Night

The Man Who Returned 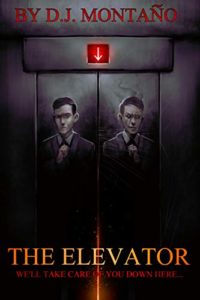